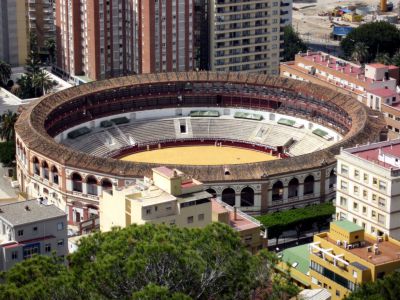 La Malagueta, the bullring of Malaga, can be found in the center of the city, near the Paseo de Reding. The structure of the arena is in the style of neomudejar in the shape of a hexadecagon (16 sides). The ring measures 169 feet in diameter. It has holding pens, stables, dressing rooms, and most importantly, a first aid post.

La Malagueta hosts events during the fighting season, including two fights in Holy Week. One of the fights is named Corrida Picassiana for Pablo Picasso. When Picasso was a child, his father often brought him here to watch bullfights. It was here Picasso developed a lifelong passion for bullfighting.

The contest between man and bull appears often in Picasso's sketches and paintings. In a 1925 painting of his son Paul, the child was dressed in the traditional costume of a bullfighter with the red cape in one hand. In the background, one can see the subtle outline of a bullring arena.

The bullring has a season from April to September. It is a short walk from Malagueta beach in the eastern part of the old town. The best view of the ring is from the Castle of Gibralfaro, above the Malaga Fortress.
Image by Olaf Tausch on Wikimedia under Creative Commons License.