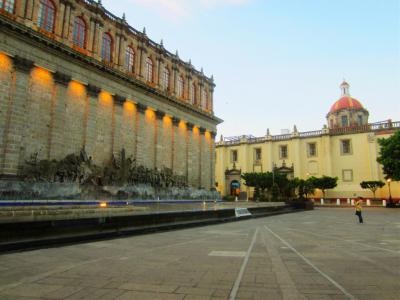 Founders Square is an urban square in the cultural center of Guadalajara. It is directly behind Degollado Theatre. It is often used to host citywide events such as the February 14 anniversary celebration. Guadalajara was founded on 14 February 1542 by Cristóbal de Oñate, a Basque conquistador, as the capital of the Kingdom of Nueva Galicia, part of the Viceroyalty of New Spain.

There are a number of public artworks in Founders Square. The Frieze of the Founders of Guadalajara (Friso de los Fundadores de Guadalajara) is a sculptural fountain of the founders of Guadalajara. The bronze sculpture depicts Cristobal de Onate, Beatriz Hernandez and 13 families from Spain who colonized the Atemajac Valley.

The square also includes a statue of Francisco Tenamaztle and bronze sculptures of Hernandez and Miguel de Ibarra, the first mayor of the city. The buildings that surround the square include the Degollado Theatre and the tourism office of the city. The University Center of Art Architecture and Design, the Garden of San Agustin and the Temple of Saint Mary of Grace (Templo de Santa Maria de Gracia) are all nearby.
Image Courtesy of Wikimedia and Another Believer.