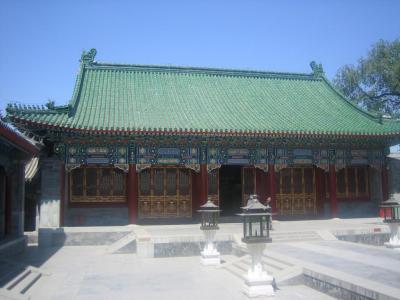 Prince Gong's Palace was constructed during the Qing Dynasty rule between 1644 and 1911. This is a stately mansion carefully preserved and also the largest mansion in Beijing, located to the north of Shichahai at Qianhai Xijie.

Prince Gong's Palace is especially known for its cultural connotations and grand architecture. It exudes an aesthetic value and is a treasure house for those who wish to study the bygone feudal society’s elite class lifestyle.

This mansion was originally the residence of an intelligent and handsome imperial guard Heshen’s residence. It was remodeled as the palace in 1777 and stands in all its glory till today. Emperor Qianlong of the Qing Dynasty especially noticed this bright 25-year-old guard and swiftly promoted him to higher positions. In charge of civil servant appointments and finance control, Heshen rapidly became wealthy.

After the demise of the aging king, his son Emperor Jiaquing who ruled between 1796 and 1820 executed Heshen for his corrupt activities and confiscated his property. In 1799, the mansion was passed on to Emperor Jiaqiing’s successor Prince Qing and then on to Emperor Xianfeng. Prince Gong received ownership of the mansion which was eventually named after him.

The traditional siheyuan courtyards, the large gardens with scenic spots, the living quarters and the 40 rooms in this mansion are definitely worth a visit on your trip to Beijing.

Why You Should Visit:
Gives a good impression of the life of the very high-ranking in the Chinese empire and seems livable, unlike the austere magnificence of the Forbidden City.
The garden would seem to be an important survival of a traditional Chinese urban garden; it's much larger than many others you will see in Beijing.
Many of the buildings have exhibitions unrelated to the original purpose, but nevertheless interesting.

Tip:
Go early to avoid the army of tour groups and try renting the English/foreign language audio guide at the entrance, if needed.