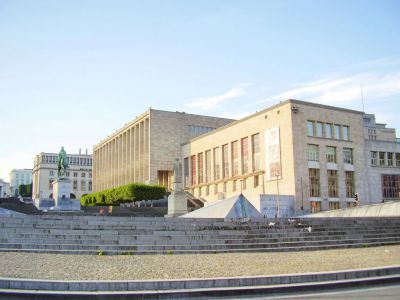 The Printing Museum is housed in the Royal Library building and focuses on the technology and history of books, printing, book crafts, and office equipment. The museum started in 1975 and has the most significant collection of printing equipment in Europe. The museum owns over 400 presses dating from the 18th century through the 20th century. Particularly notable presses in the museum include a wooden 18th century typographical press, a metallic arm press, a Stanhope printing press, and unique presses from Elskamp, Curvers and Rops. The museum also presents a cylindrical press from 1916 that was used by German forces that were occupying Brussels during World War I.

The museum also displays gilding and bookbinding samples as well as presses and furniture associated with copperplate engraving, offset printing, typography and screen printing (silkscreens and stencils). The office equipment portion of the museum displays typewriters, copy machines and calculation machines. As a historical note, the printing press was invented by Johannes Gutenberg in 1440. Gutenberg was born in Mainz, Germany. His creation of a press that included movable type remained the primary method of printing until the late 20th century.
Image Courtesy of Wikimedia and Ben2.