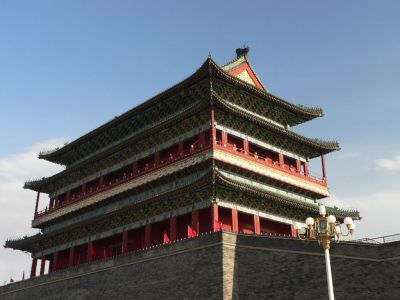 When you visit the historic Beijing city wall, do not miss out the Zhengyangmen, which is one of the wall's gates. Popularly called the Qianmen, this wall was constructed during the Ming Dynasty in 1419. The gate featured a large barbican all with an archery tower, the side walls and the side gates. Direct entry to the imperial city was guarded by this gate.

Qianmen Station, the first railway station in the city was constructed just outside the gate. During the Boxer Rebellion of 1900, the gate suffered extensive damage. In 1914, the gate was completely reconstructed and restored to its original glory.

The People Liberation Army's Beijing garrison occupied the Zhengyangmen gatehouse in 1949 after the victory of Communists. The gate became a major tourist attraction after the military vacated in 1980. This gate stands tall at 42 meters and is the highest gate in the city wall.

Tip:
You can access the interior of the structure that sits atop the former wall, where there are fascinating displays of the history of Beijing, along with art displays on one floor, and (of course) a gift shop. There is a magnificent 360-degree view of the city!
Image by Nagyman on Wikimedia under Creative Commons License.