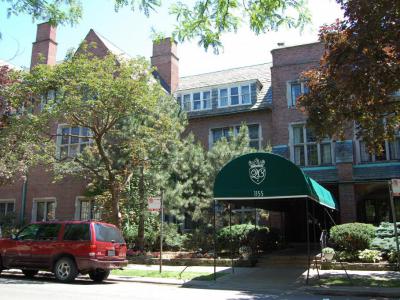 The Quadrangle Club is a membership club at the University of Chicago. It has a full-service dining room, a bar, several lounges, and sleeping quarters for members and/or their guests. It has 17 sleeping rooms, including 5 suites with an extra sitting room. It is one of the few locations in the city of Chicago that has green clay tennis courts.

The Quadrangle Club was created in 1893 as a social club for the faculty of the newly established University of Chicago. It was to be a place to gather for "study, socialization, and especially communication," and from its inception was open to members of the community as well as to faculty. It originally occupied a suite in the Barry Hotel, located at 59th Street between Dorchester and Blackstone.

In 1916, to make way for Rockefeller Chapel, the Quadrangle Club agreed to relocate to the present site. Howard Van Doren Shaw designed the new building, which opened on December 21, 1922. Shaw designed a building resembling an English country house, with large open spaces and—on the second floor, facing the tennis courts—abundant natural light. In the summer of 1929, the old club house was moved (in two pieces) two blocks west to 956–960 East 58th Street, where it was renamed Ingleside Hall.

The Quadrangle Club enjoyed a golden age during the 1920s and 1930s when it functioned as a popular gentleman's club offering billiards, a card room, and stimulating lunchtime conversation. The "Round Table", a lunchtime tradition in which professors from diverse fields gathered to share ideas, flourished.

As World War II came to an end the Quad Club found itself redefined by the changes in the times. There was pressure to admit all faculty, including women professors. It lost many amenities of the gentleman's club as financial pressures forced rooms to be taken over for catering affairs.

The Club has always kept its dues and fees low to accommodate faculty members with modest incomes, and catering helped to make up the inevitable deficits. While the Quadrangle Club is the University of Chicago's faculty club, university staff, parents, and neighbors are welcome to join. Roughly one quarter of the club's membership are not University of Chicago faculty or staff.
Image Courtesy of Wikimedia and Kids writer.
Sight description based on Wikipedia.