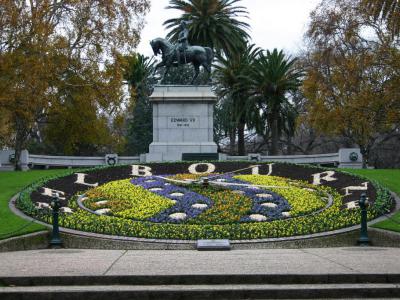 The Queen Victoria Gardens is a memorial to the state of Victoria’s namesake. Following her death in 1901, the state deemed that the long reigning monarch should be given an appropriate memorial and 4.8 hectares was set aside. The gardens are bounded by St Kilda Road, Alexandra Avenue and Linlithgow Avenue and make up part of the large group of city gardens known as the Domain Parklands. Taking a stroll through the gardens is the perfect way to revive your spirits and seek out some green space close to the bustling CBD.

There are several features to visit while wandering through the Queen Victoria Gardens. One of the highlights is the large floral clock, which was donated in 1966 and features more than 7000 blooms. Behind the clock is a large bronze statue of Edward VII who succeeded Queen Victoria on the British throne. One of the main features of the park is the statue of Queen Victoria, which is at the highest point in the park, and she is shown wearing full regalia. Built from marble by James White, Queen Victoria looks down over the parklands’ lawns and garden beds. There are many other statues that are scattered around the parklands including The Genie, The Phoenix and The Pathfinder.
Image by Cookaa on Wikimedia under Creative Commons License.