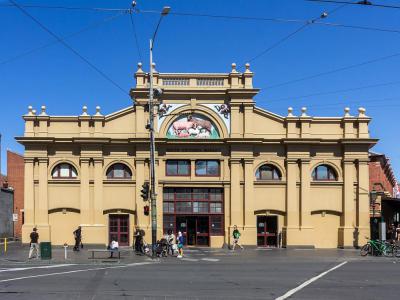 The Vic Market, or the Queen Vic as it's sometimes called, is the last major market left in Melbourne's Central Business District (CBD). It is the largest open-air market in the Southern Hemisphere, and it has been in operation since 1878.

In the city's early days, there were several different markets spread around the CBD. The Western Market was the first official fruit and vegetable market, starting in 1841. It was so popular that the Eastern Market was started in the 1840s, and that one became even more popular. The Queen Vic started as a group of buildings and smaller markets in the area of the Old Melbourne Cemetery. This cemetery was closed in 1854 and is the final resting place for many of the area's early settlers, including Melbourne founder John Bateman.

The market continued to grow in size due to overcrowding at the Eastern and Western Markets. In 1877, the original A-F sheds of the Queen Vic were constructed. Shops were built along Elizabeth Street, as well as the well-known Meat and Fish facade.

The Queen Victoria Market is one of Melbourne's biggest tourist draws. It operates every day except Mondays and Wednesdays, but a night market is held on summer Wednesday evenings. You'll find meat and poultry, seafood, fruits and vegetables, and many special delicacies. You'll also see lots of live music, bars, and entertainment options. There are also artists and clothing stores, jewelry makers, and homemade arts and crafts.

The market is home to over 600 small businesses, and it's a great way to connect with local artists. There's no better place to find authentic souvenirs, lively banter, fresh food, or just a great cup of coffee.

In particular, the Night Market is a multicultural event with street foods from all over the world, festival bars, and live entertainment.

Many of the original buildings are intact, including the retail row houses along Elizabeth and Victoria Streets built in the late 1800s. The oldest building is the Meat Hall, built in 1869.

Often raved about are the assorted delicatessen meats and cheeses sold in the section closer to the city end of the market. The selection and quality of goods rival anything you'll find anywhere else in the city.

There are many repetitive booths, but keep an eye out for exotic finds—especially in the fruits and vegetable sections.

There are sweets galore, including a doughnut truck that you shouldn't miss. There's also a fantastic bakery located in the Dairy Produce Hall, with French pastries and baguettes—perfect for tea time.

Some vendors try to sell out each day, so the prices get lower the later in the day you visit!