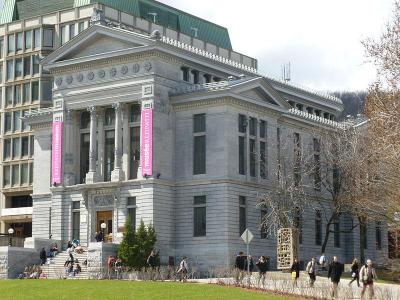 Redpath Museum came into existence in 1882 and is one of the oldest buildings in the country constructed for the very purpose it serves today. This museum has an extensive collection of Sir William Dawson. He was a well known natural scientist and principal of McGill.

Redpath has always been appreciated for its unique design. It is built along the lines of the Greek Revival Style which was popular in the 1800s. At this museum, you can find a whopping three million object collection in different genres such as ethnology, zoology, geology, paleontology, and mineralogy.

The permanent exhibition here features one shrunken head, 16,000 specimens of minerals, 3 Egyptian mummies, 2300 Roman and Greek coins and 150,000 fossils that include bones of dinosaurs.

A science myth is busted by McGill scientist every Friday called Freaky Fridays at the museum. Those who are interested attend free, informative lectures at the Redpath Auditorium. Visit the museum on a Sunday when science documentaries are screened at 4pm. If you are interested in attending lecture series given by prominent McGill and other scientists, be at the Redpath on Thursdays at 6 pm.

Between September and April, Redpath Museum holds interesting and exciting family events such as Discovery Workshops. Kids of any age enjoy participating in hands-on activities that are related to science. If you are in Montreal on a Sunday, do take part in the mummy tour. This guided tour is offered to the public free of cost. Beginning at 3 pm, the tour takes you through mummy and Egyptian exhibits.

Why You Should Visit:
If you are interested in minerals/rocks you'll be in heaven, but there are plenty of other things to appreciate and learn. How can you go wrong with mummies, shrunken heads and fossils of everything?

Tip:
You can visit the museum for free but a donation is welcomed.

Montreal is a wonderful city blessed with many examples of great French culture. Among them are Montreal's museums and galleries, which offer a diverse view of the local and international culture that flows through the city. Take this walking tour to explore the most exciting exhibitions of Montreal's museums.

Montreal is an old, but a very modern city. The architectural sights provide ample opportunities for exploration. Modern buildings are situated right next to some of the oldest and most fascinating structures. Take this walking tour to discover the most famous architecture Montreal has to offer.