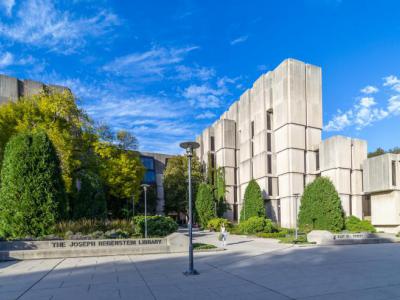 The Joseph Regenstein Library, commonly known as "The Reg" is the main library of the University of Chicago, named after industrialist and philanthropist Joseph Regenstein. It is one of the largest repositories of books in the world and is noted for its brutalist architecture.

The library stands on the former grounds of Stagg Field. In 1965, the Joseph Regenstein Foundation gave $10 million to the University for construction of the library. It is built out of grooved limestone, which, from a distance, resembles concrete. University tour guides often remark on the resemblance between each of the elements of the building's facade and the fore edge of a book.

Today, the "Reg" is the flagship institution of The University of Chicago Library system, which is considered among the top five in the world for breadth and depth of material, and receives high marks from users. The Regenstein Library is a popular social space for the University of Chicago college students. It is also the location of the Special Collections Research Center, which houses rare book collections, manuscripts, and university archives.

Located next to The Reg is the Joe and Rika Mansueto Library, designed by Chicago-based architect Helmut Jahn, consists of a glass-domed reading room, under which lies an automated storage and retrieval system stretching fifty feet underground. It allows the library to maintain physical copies of materials available online while creating space within the book stacks to accommodate approximately 20 years of new print acquisitions.

Mansueto Library became the recipient of several architectural accolades in the years following its dedication.
Image Courtesy of Wikimedia and Kenneth C. Zirkel.
Sight description based on Wikipedia.