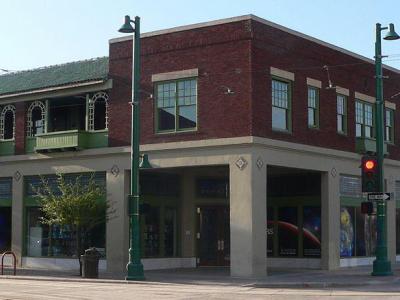 The Rialto Theatre is located in one of the more urban districts of downtown Tucson, across the street from Club Congress. It bears much similarity to the neighboring Hotel Congress, being built in the same year and by the same contractors.
In its capacity as a concert venue since 1995, The Rialto was in need of many repairs, as it still sported a swamp cooler (rather than more modern air conditioning) and a dilapidated interior. Since its latest revitalization in 2004, the theater still boasts some of its original historic interior with a nod to an art nouveau motif, along with new and much-needed air conditioners.
Primarily holding music concerts from all genres, The Rialto hosts other shows and events as well, from dance, performance, and occasional film screenings. Approximately 150 events occur at the Rialto annually, with reported attendance of more than 100,000 patrons.
Image by Tech109 on Flickr under Creative Commons License.
Sight description based on wikipedia

This sight is featured in a self-guided walking tour of Tucson, Arizona within the mobile app "GPSmyCity: Walks in 1K+ Cities" which can be downloaded from iTunes App Store or Google Play. Please download the app to your mobile phone or tablet for travel directions for visiting this sight. The app turns your mobile device to a personal tour guide and it works offline, so no data plan is needed when traveling abroad.

A great city will offer great pleasures. The pleasure of art is one of the finest in the world and a tour to the city galleries will give you an insight to the art of this area of the world. The proposed galleries are a selection of the greatest in the city. Make sure you enjoy the tour and maybe get something for yourself.

Tucson boasts a variety of structures with a great design and the finest architecture. Walking down the streets you can admire different architectural styles in the buildings, such as Spanish Colonial style, Moorish style and others. Take this tour to get acquainted with Tucson's refined architecture.

Tucson is well known for its diverse range of museums that demonstrate the richness of this area. The following guide will help you to learn more about the culture, art, science and technology of Tucson and of the state of Arizona in general.

Tucson boasts an array of religious buildings of different denominations, starting with Jewish religion right up to Christian Orthodox. You will be amazed by their architectural beauty and design. In this self-guided tour you will visit the most astounding and famous religious places.