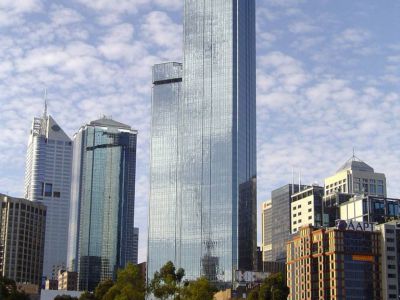 Rialto Towers is the tallest office building to be found in the southern hemisphere, rises to a height of 243 meters. The building’s foundations extend 20 meters underneath the ground and it is encased in 22,000 panes of glass that reflect the unpredictable skies of Melbourne. Since it was opened in 1986, Rialto Towers has been an unmistakable landmark of the CBD’s cityscape. Within the building complex, there are two towers – the South Tower, which has 55 floors and the North Tower, which has 40 floors.

Within the building there are several dining options and with the opening of even more restaurants, bistros and cafes in 2010, it has cemented its place as a gastronomic hub of Melbourne. The world class Intercontinental Hotel at Rialto can also be found within the complex and provides conveniently located accommodation in the heart of the city. The towers were home to the first observation deck in Melbourne, and although it shut in 2009, you can still enjoy breathtaking views from the higher stories of the building. The building is open to the public from 7am to 6:30pm Monday to Friday and is a must do for any visitor wanting to look out over the impressive expanse of the city.
Image by Uncke Herb on Wikimedia under Creative Commons License.