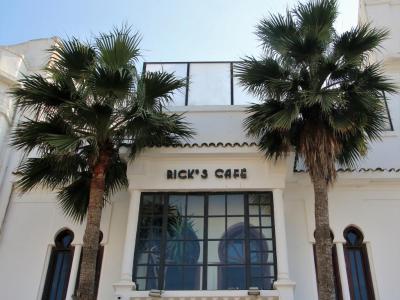 Go to number 248 Boulevard Sour Jdid, Place du Jardins Public in Casablanca, act natural, knock twice and ask for Rick. That would be a fun way to wind up a busy day in the Old City. There is no Rick, but this is his place; a restaurant cafe that opened in Casablanca in 2004. It is modeled on the shady dive made famous by Humphrey Bogart.

The owners are The Usual Suspects company. They maintain this cafe is the real McCoy. Rick's Cafe was conceived by Ms Kathy Kriger. Kathy retired from the diplomatic service after the 9/11 attacks. Alarmed at the "war on terrorism", she made her bid for tolerance by investing in a Muslim country. The result was Rick's Place. Kathy died in 2018.

The cafe is in a renovated Moroccan mansion with a courtyard built in 1930. Two palm trees stand on either side of the front door. There are three facades. There is a main entrance with sturdy wooden doors as in the movie. There are also a facade facing the sea and a dead-end service entrance.

American architect Bill Willis brought back the architectural details of the film. He developed the curved arches, the sculpted bar, the balconies, balustrades, the lighting, the plants and the shadowy white walls. The fireplaces are made from carved marble and painted tiles. The floors are terra cotta tiles.

There is a Pleyel piano and music every night Tuesday through Sunday. There are often jam sessions with musicians passing through town. Play it again, Sam.
Image Courtesy of Wikimedia and Werner100359.