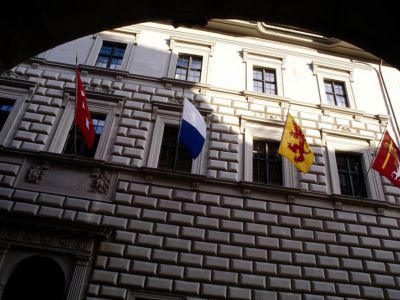 Perhaps the most impressive Renaissance palace in Lucerne's Old Town, the Ritterscher Palace began as a private residence, commissioned in 1556 by Mayor Lux (Lucius) Ritter. The former mercenary and rich landowner, Ritter sought to emphasize his social status by building a Renaissance palazzo in the Florentine style, featuring heavy blocks and nice masonry, which had already been practiced in Florence for 100 years, but still new in Lucerne.

Hired for the job was a widely famous Italian stonemason Giovanni Lynzo, aka Hans of Trient. Initially reluctant, he was engaged but eventually, during the work, was found guilty of heresy and beheaded. Legend has it that on the day of his execution the architect accursed Lux Ritter who, coincidence or not, died a few days later.

The construction of the three-storey palace with an open courtyard was completed by that time only by about two-thirds. Since the heirs of Lux Ritter were not able to continue, the project was taken over by the city council of Lucerne, who finished the building and in 1578 handed it over to the newly arrived Jesuits.

The striking edifice is also the seat of the Cantonal Administration, whose offices are located in the spectacular inner courtyard featuring a three-story loggia with Tuscan columns. So please be quiet!

NOTE: generally open to the public during office hours, Monday to Friday, the building can be closed anytime for governmental events or state receptions. The admission is free.
Image Courtesy of Lucerne Tourism..