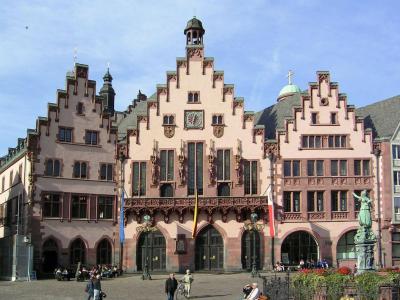 The Römer ("Roman") is the Rathaus (City Hall) of Frankfurt and one of the main local historic landmarks. This medieval building has been in service for over 600 years and still houses offices of the local government.

In 1405, the Römer family of the wealthy Frankfurt merchants sold their house, along with the adjacent Goldener Schwan (Golden Swan) building, to the city council. Since then the property has continuously accommodated different civic offices until present. Over the years, the complex has been expanded by addition and purchase of nearby buildings, so today it represents a labyrinth of several structures connected by streets. A bridge, jokingly referred to as the “Bridge of Sighs” (after its famous counterpart in Venice), connects the Römer to the offices across the street. Two towers were added to the complex in the early 20th century. One of them is dubbed Langer Franz (Tall Franz) in homage to the city's tall mayor, and the other, smaller one, Kleiner Cohen (Small Cohen), after a popular song of the time.

Römerhalle and Schwanenhalle are the oldest rooms within the complex, and are virtually unchanged after 600 years. They are found on the ground floor of the Römer and Goldener Schwan houses, and can be entered directly from the main entrance in Römerberg.

Still, the main attraction of the Römer, perhaps, is Kaisersaal (the Emperor Hall) where coronation banquets of German Kings and Emperors of the Holy Roman Empire took place. The hall contains 52 portraits by famous artists of all the German Kings and Emperors, starting from Freidrich Barbarossa in 1152 to Franz II who was forced to abdicate by Napoleon in 1806. There is also an ornate balcony from where the rulers used to greet the crowds down below. The annual Christmas fair held in the square outside the City Hall is a regular attraction in its own right, drawing thousands of visitors from all over the world.

Why You Should Visit:
Truly an eye-catcher, even more interesting in the run-up to Christmas than during the rest of the year.
German history and culture is perfectly preserved in this Gingerbread part of town.

Tip:
Make sure you walk to the river to catch the Frankfurt cityscape which is only a few hundred meters away!