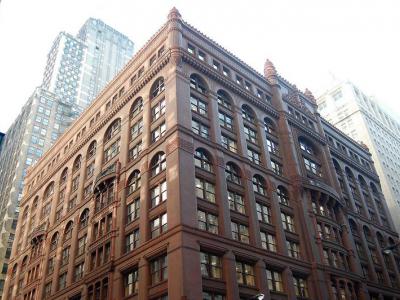 The Rookery Building is a historic landmark located in the Loop community area of Chicago. Completed by John Wellborn Root and Daniel Burnham in 1888, it is considered one of their architectural masterpieces. The oldest standing high-rise in Chicago, the building is twelve stories tall and measures 181 feet (55 m). The Rookery has a unique style with exterior load-bearing walls and an interior steel frame. The name Rookery comes from the previous building on this site, which became home to many birds, especially pigeons. The red marble, terracotta and brick facade is a combination of Roman Revival and Queen Anne styles that embraced Richardsonian Romanesque architecture. The building itself is a combination of iron framing and masonry bearing walls and, as such, manifested a transition from masonry to steel skeleton load-bearing structures.

Why You Should Visit:
From the outside, it looks like an ordinary classic building of Chicago, whereas, on the inside, it really gets you pulled in and held in awe.

Tip:
You can stop in and see the lobby for free, but to see the best parts (such as the famed D-spiral staircase & other architectural aspects) you will need a guided tour which is offered Monday through Friday at noon.