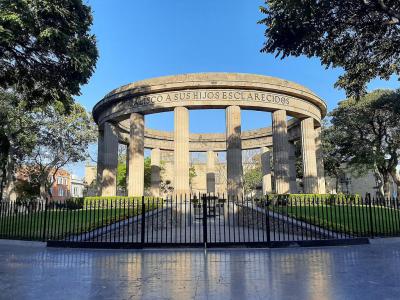 Rotunda of the Illustrious People of Jalisco, Guadalajara

Architect Vicente Mendiola designed the rotunda in a neoclassical style. The rotunda is made of quarry stones and has 17 Doric columns. The center of the memorial features a cauldron. The upper ring around the rotunda features an inscription that can be translated as "To Jalisco's distinguished sons."

The memorial has statues of dozens of prominent Jalisco residents. Most of the residents were writers, musicians, artists, philanthropists, and revolutionaries. In addition, the memorial has 98 urns with remains of famous residents.

The memorial is especially beautiful at night when it's lit with multi-colored lights.
Image Courtesy of Wikimedia and Carlos t.