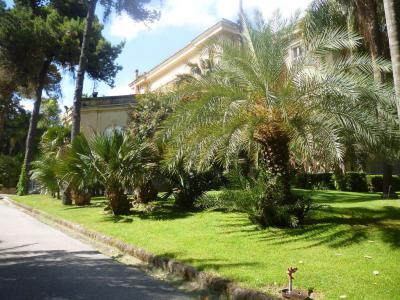 The Royal Botanical Gardens in Naples is an educational facility attached to the Department of Mathematics, Physics and Natural Science of the University of Naples. Endangered species of plants are preserved here.

The Royal Botanical Gardens was instituted by a decree passed by Joseph Bonaparte, the brother of Napoleon. It was one of the many scientific institutions established by the French in Naples. It was laid on lands owned by the monks of Santa Maria della Pace and the Cava Hospital. Architects, De Fazio and Paelotti were given the task of designing the garden and the palatial structures within the grounds. It opened in 1810 and Michele Tenore was its first director. Tenore and all subsequent directors added to the diverse species of plants found in the garden today.

The Royal Botanical Gardens covers an area of 15 hectares and has over 10,000 species of plants from all over the world. The garden is divided into three sections, ecology, systems and ethno botany. It has succulents and bushes from the Mediterranean, medicinal plants, a palm grove, a citrus grove and a fernery. There is also a recently restored 17th century castle within the garden where lectures and exhibitions are held and a 5,000 square meter Merola Greenhouse that can be visited only by appointment unlike the rest of the Royal botanical Gardens which is open to the public all week except on Sundays.
Image by Luis Fernández García on Wikimedia under Creative Commons License.