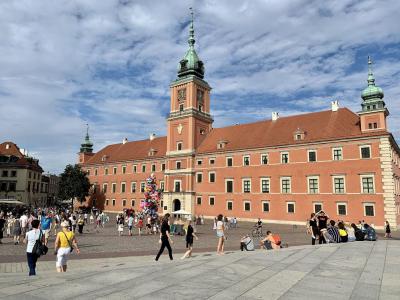 The Royal Castle as it stands today was rebuilt and restored in the late 1970s and early 1980s. The Germans had destroyed it during World War II, but the foundation and many components were rescued and used in the reconstruction.

The original structure was built in the Middle Ages. Sometime around 1410, the first parts of the Curia Maior, or Big Manor, were built. It functioned as a prince manor. When Masovia was incorporated into the Kingdom of Poland in 1526, the building became a royal residence. Between 1569 and 1572, King Sigismund II Augustus began altering the structure to accommodate the new parliament. Next to Curia Maior, the king built a Renaissance-style building known as Royal House, where he resided when parliament was in session. Over the years, the castle continued to expand.

The castle was destroyed during The Deluge from 1655 to 1657 when Sweden and Russia invaded. Reconstruction began in 1657, but the royal purse was stretched, so construction was limited to rebuilding what had already been there.

The castle operates as a museum while also being the setting of state functions. Inside the castle, you'll see one of the most impressive art collections in Europe.

The Jagiellonian Rooms contain the modern Gallery of Painting, Sculpture, and Decorative Arts. The Houses of Parliament, where the world's second-oldest constitution was signed into effect, is available to be toured. The Royal Apartments provide a glimpse into the lavish lifestyles of the royal families and the chance to view many masterpieces from the 1700s. The Lanckoronski Collection includes two Rembrandts and a Stradivari violin.

The castle, together with Old Town Warsaw, is a UNESCO World Heritage Site.

Opening Hours:
Mon: 10am-6pm (May-Aug); Tue-Thu, Sat: 10am–6pm; Fri: 10am-8pm; Sun: 11am–6pm
On Wednesdays, admission to the permanent exhibitions of the Castle and the Under-Roof Palace is free (abbreviated route)
The Grand Courtyard, the Kubicki Arcades, and the Upper Garden are available for no charge until 5pm and on Fridays until 7pm
Image by Kgbo on Wikimedia under Creative Commons License.