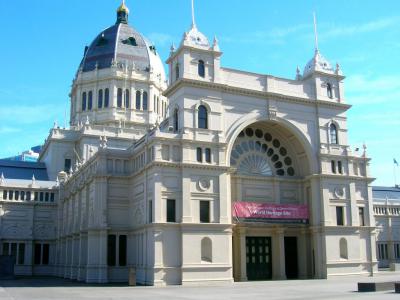 The Royal Exhibition Building in Melbourne is Australia’s first UNESCO World Heritage Site building. Built in 1880 for Melbourne to host its first international exhibition, it is today one of the oldest surviving exhibition buildings. With eyes from around the globe focused on the young colony, Victoria splashed a lot of its gold wealth around to produce this stunning building. Located in Carlton Gardens at the north-eastern fringe of the CBD, visiting the site is a must while in Melbourne. The building is next to the Melbourne Museum, and is in fact, the largest of the museum’s acquisitions.

Following its wild success hosting the Melbourne International Exhibition and the Melbourne Centennial Exhibition in 1888, the building was also selected as the site to open the first Parliament of Australia on May 9th, 1901 following federation. It was also at the Royal Exhibition Building on September 3rd, 1901 that the Governor-General’s wife, the Countess of Hopetoun announced the winner of the competition to design the Australian flag and it was unrolled for the first time and flown above the building’s dome. Today the building is still extensively used as an exhibition hall and there are regular tours that can be arranged through the Melbourne Museum.
Image by Donaldytong on Wikimedia under Creative Commons License.