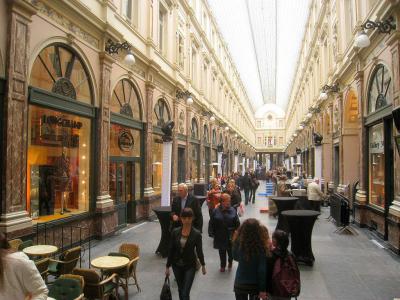 The Royal Galleries of Saint-Hubert are an excellent example of a 19th century covered shopping gallery. While the total of seven such galleries were built in Brussels between the 1820s and 30s, the St. Hubert Gallery is one of the three that have survived. Designed by architect Jean-Pierre Cluysenaar, it was officially opened in 1847. The two primary sections of the gallery are called the King’s Gallery and the Queen’s Gallery, each measuring 8 meters (26 feet) wide and 213 meters (699 feet) long, and a smaller section therein is dubbed the Prince’s Gallery.

The concept of a shopping gallery originated in Paris in the 1780s when King Louis XIV, then financial restrained, rented portions of his garden to shopkeepers. The latter constructed little shops within the garden to sell their wares and thus attracted many people, making it a de facto meeting place. Later on, this concept of a shopping/gathering venue evolved into the covered galleries which were meant primarily for the richer classes.

The stately 19th-century Galeries Royales Saint-Hubert arcade houses luxury boutiques, clockmakers and chocolate shops. A particular standout among them is the Neuhaus confectionery shop opened in 1857. Also, within the corridors of St. Hubert Gallery today you will find a number of cafes and restaurants offering great dining experience.

Why You Should Visit:
A small gallery with grand architecture; lots of shops – high-end in appearance, but pretty well-priced.
Top quality chocolate is a bit costly but if you want to indulge, this place offers a good selection.

Tip:
Go to the top floor of "Le Pain Quotidien" for a view from the upper side.
Image by Daderot on Wikimedia under Creative Commons License.
Sight description based on wikipedia