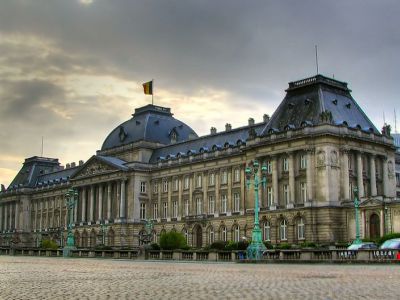 The Royal Palace of Brussels is the working office of the Belgian King in which the monarch executes his duties as a Head of State, i.e. grants audiences and deals with national affairs. The Royal Palace is not the residence of the royal family; the latter reside on the outskirts of Brussels in the Royal Castle of Laeken. The Royal Palace overlooks Brussels Park in front of it, and is separated from the park by a long square, called Place des Palais. The present-day appearance of the palace dates back to around 1900, while the palace grounds were once part of a very old palatial complex, called Coudenberg Palace, emerged in the Middle Ages.

One of the most famous elements of the palace is the Mirror Room renowned for its unique ceiling fresco and central chandelier adorned with wing cases from millions of Thai jewel scarab beetles. Called the Heaven of Delight, the fresco was created by the team of 29 artists led by Jan Fabre and took over three months to complete; it features myriads of shapes glowing in a changing greenish-blueish color, depending on the angle the light hits the surface.

Why You Should Visit:
For a short period of time, between late July and early September, the Royal Palace is open to the public; the entry is free and visitors are allowed to take pictures.
From the salon room through the passageway, the back halls to the prestige ballrooms, attention to details is rewarded – and that's from the floor up to the ceiling.

Opening Hours:
Tue-Sun: 10:30am-3:45pm
Image by Nasty plus on Wikimedia under Creative Commons License.
Sight description based on wikipedia