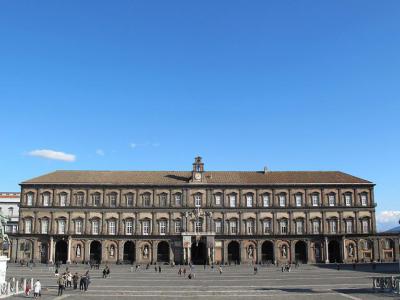 The Royal Palace is located opposite the Basilica of San Francesco di Paola on the Piazza Plebiscito. It was used as a residence by the Bourbon kings who ruled Naples between 1730 and 1860.

The Royal Palace was commissioned by the Spanish viceroy in Naples, Fernando Ruiz de Castro in 1600 to host Philip III of Spain on a planned visit to Naples. The king, however, never made the visit. The present palace was designed by architect, Domenico Fontana for the Bourbon kings in the 17th century. It was greatly expanded and embellished during the reign of King Ferdinand II. The most recent refurbishment was after the damage caused to the structure during World War II.

The Royal Palace houses the National Library of Naples, several city offices including the tourist office and a small museum today. A magnificent double staircase takes visitors up to the former royal apartments with their lavish furniture and furnishings. The Royal Chapel has a large 18th century Nativity scene that is regarded as the building’s art treasure. The National Library of Naples has an impressive collection of papyrus scrolls found during excavations at Herculaneum and a 5th century Coptic Bible. The western façade of the palace that faces the Piazza Plebiscito has statues of many of the kings from different dynasties that ruled Naples from the twelfth century.
Image by Radomil on Wikimedia under Creative Commons License.