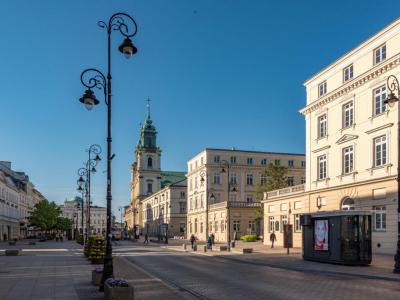 The Royal Route began as a communication route that led from the Royal Castle and Castle Square to King Jan III Sobieski's personal residence, known as Wilanów. The route runs through Old Town Warsaw, connecting many notable points and containing many monuments and sights.

The first part of the Royal Route, Krakowskie Przedmiescie, is one of Warsaw's best known and most prestigious streets. Around it, you will find many historical structures and sights. The north end of the road starts at the Presidential Palace and passes Warsaw University, the Polish Academy of Sciences. You'll also see Potocki Palace, Kazimierz Palace, Tyszkiewicz Palace, Czetwertyński Palace, Hotel Bristol, St. Anne's Church, and Holy Cross Church.

Do not miss a stroll through the grounds of Lazienki Park. This 76-hectare park contains palaces, villas, monuments, and decorative structures. In the center of the park is the much-photographed Palace on the Isle. If you're in Warsaw during the summer, keep an ear out for the Sunday Chopin Concerts at the Fryderyk Chopin monument.

The Royal Route connects most of the must-see sights in Warsaw. Strolling the sidewalks here and taking your time to visit each monument, garden, and palace is well worth your time. There is much to explore and many quiet hidden treasures along the way.

One of the best-kept secrets is the summer residence of King Jan III Sobieski, known as Marysieńka. The palace is operated as a museum, with elaborate and authentic 17th, 18th, and 19th-century interiors throughout. It's also home to the Polish Portrait Gallery. The gardens are not to be missed. The house is often called the "Polish Versailles."
Image by Tilman2007 on Wikimedia under Creative Commons License.