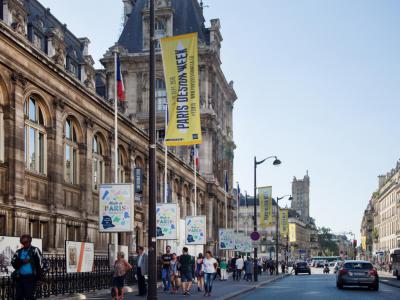 Rue de Rivoli is one of the most famous streets in Paris, a commercial street lined with shops including the most fashionable names in the world. It bears the name of Napoleon's early victory against the Austrian army, at the battle of Rivoli, fought on January 14 and 15, 1797.

The new street that Napoleon Bonaparte pierced through the heart of Paris includes on one side the north wing of the Louvre Palace, (which Napoleon extended) and the Tuileries Gardens. Upon completion, it was the first time that a wide, well designed and aesthetically pleasing street bound the north wing of the Louvre Palace. The restored Bourbon King Charles X continued the rue de Rivoli eastwards from the Louvre, as did King Louis-Philippe. Finally, Emperor Napoleon III extended it into the 17th-century quarter of Le Marais.

Today visitors will find many great restaurants, cafes and shops on this street. The part of the street close to Louvre is more commercial and offers more shopping and dining options. The portion of the street in the Le Marais district is quieter and more picturesque and offers a real feel of Paris. A stroll on this street is time well spent.
Image by Hop Phan on Wikimedia under Creative Commons License.
Sight description based on wikipedia