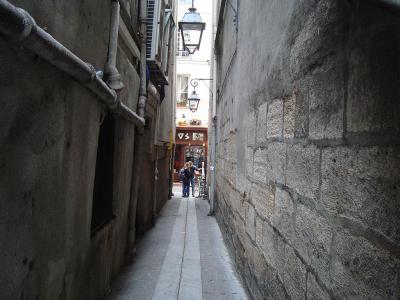 Originally called Rue des Étuves, Rue du Chat-qui-Pêche is the narrowest street in Paris. With a width of only 1.8 meters, it is quite possible to reach out and touch walls on both sides of the street simultaneously. Built in 1540, it is located in the Latin Quarter of Paris. Its total length is 29 meters, extended from Quai Saint-Michel to Rue de la Huchette.

The name, Rue du Chat-qui-Pêche, translates as “the street of the fishing cat” and originates from the picture drawn on a shop signboard. Curiously enough, the street gave its name to the novel titled “A halászó macska uccája” by Hungarian author Jolán Földes who lived on this street in the 1930s.

The back doors of many restaurants open to the street, emitting mouthwatering aromas of food cooked in the kitchen. The alleyway offers refuge from the hustle and bustle of the trodden tourist paths between Pont St. Michel and Petit Pont. You can take a short-cut through Rue du Chat-qui-Pêche, but before you enter, make sure you are slim enough to squeeze through without getting stuck.
Image by LPLT on Wikimedia under Creative Commons License.
Sight description based on wikipedia