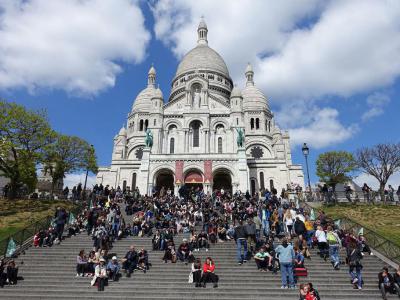 The white dome of Basilica of the Sacred Heart of Jesus, commonly known as Sacré-Coeur Basilica, sits majestically atop the arty district of Montmartre with a breathtaking view of the city of Paris.

Distinctive and imposing, the basilica was built between 1870 and 1919, by the French government as a symbol of the return of self-confidence after the devastating years of Franco-Prussian War and to reassert the power of the Catholic Church. Built on the top of the Montmartre hill, the highest point of the basilica is even higher than the top of the Eiffel Tower. Due to its prominent location, Sacré-Coeur is one of the most noticeable landmarks in Paris.

Don't get too seduced by its majestic views of Paris and miss spending some time inside. The beautiful golden mosaic set high above the choir is definitely worthy of some awed gazing. The largest and most eye-catching mosaic is called Christ in Majesty and it is meant to symbolize France's devotion to the Sacred Heart. Whether you are a devotee to Sacred Heart or not, it is hard to take your eyes away from it.

Why You Should Visit:
The Basilica of Sacré-Coeur is one of the best known Parisian landmarks and the 2nd most visited church in Paris after Nôtre-Dame Cathedral. The inside of the church is exquisite and beautiful, and the view from its stairs is unbeatable!

Tip:
You will need a level of fitness to climb the stairs; however, you can also get inside a cable car for a small fee. Alternately, you can hop on the free mini-train which starts from opposite the Windmill Theater in Montmartre and stops behind Sacré-Coeur Basilica.