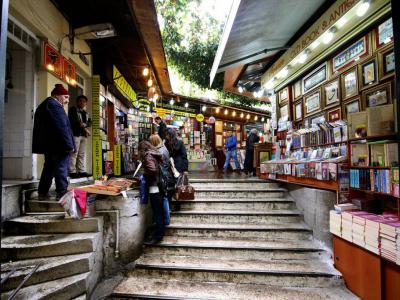 Sahaflar Çarşısı (Old Book Bazaar) is located between Fesçiler Gate and Beyazit Square in the Fatih district of Istanbul, and has been in place since the 15th century. Traditionally, during the Ottoman period, bookstores were situated close to theological schools, known as madrasahs. After the Bazaar was constructed in 1460, the bookstores were gathered in a specially designated section.

At the end of the 19th century, the stores were severely damaged by an earthquake and subsequently had to be moved to their current location. Another disaster – huge fire – struck in 1950 and also had its toll on the Bazaar, reducing to ashes many of its valuable manuscripts. Shortly afterwards, all the bookshops were nationalized and rebuilt. Nowadays, there are in total 23 book stores in the Bazaar. Installed in the middle of it is the bust of İbrahim Müteferrika, the person who introduced printing press to The Ottoman Empire.
Image by Matthias Süßen on Wikimedia under Creative Commons License.