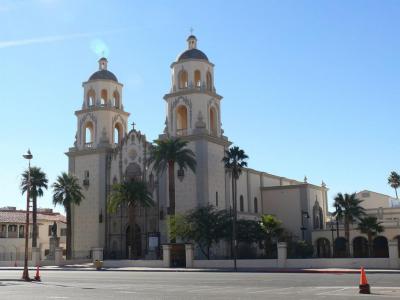 Saint Augustine Cathedral is the mother church of the Roman Catholic Diocese of Tucson. The cathedral features an elaborate cast stone façade with the coat of arms of Pope Pius XI, who was the pope at the time of the building's construction. Various indigenous desert plants are featured in the stone designs, such as yucca and saguaro blossoms, as well as a representation of the Mission San Xavier del Bac. A large 12th or 13th-century crucifix hanging inside the cathedral's vestibule was carved in Pamplona, Spain. The cathedral's floor is set on a slight grade, so that the main altar is clearly in view of the entire congregation. The seating can accommodate up to 1,250 people. The pipe organ was designed and built by David McDowell in Tucson and has thirty-eight ranks.
Image by Peter Potrowl on Wikimedia under Creative Commons License.
Sight description based on wikipedia

This sight is featured in a self-guided walking tour of Tucson, Arizona within the mobile app "GPSmyCity: Walks in 1K+ Cities" which can be downloaded from iTunes App Store or Google Play. Please download the app to your mobile phone or tablet for travel directions for visiting this sight. The app turns your mobile device to a personal tour guide and it works offline, so no data plan is needed when traveling abroad.