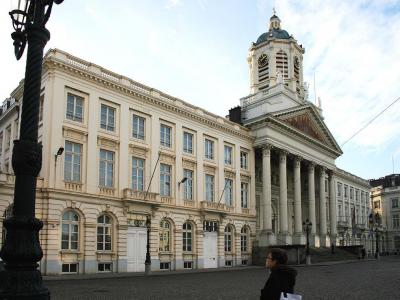 The Church of St. James on Coudenberg is a neoclassical Roman Catholic church located on the historic Place Royale/Koningsplein in central Brussels. The medieval abbey church that originally stood on this location was demolished by command of Charles Alexander of Lorraine during his expansive urban planning projects, despite having escaped the great fire of 1731 that destroyed the nearby Coudenberg Palace.

The new church was built in line with Rue Montagne de la Cour/Hofberg on its present location on the Place Royale/Koningsplein. Construction of the facade was started by architect Gilles-Barnabé Guimard after the designs of Jean-Benoît-Vincent Barré (1775). The first stone was solemnly laid by Charles Alexander of Lorraine on 12 February 1776. The portico was finished in 1780. The nave, transept, choir and sacristy were built under supervision of Louis Montoyer in the years 1785–1786.

After the consecration of the building, it was used as an abbey and parish church at the same time. Moreover, it was the official church of the court of the Governors of the Habsburg Netherlands. The present building was designed to serve as the Church of the Abbey of Saint-Jacques on the Coudenberg and therefore has a deep extended choir with place for choir stalls for the monks.

During the French Revolution, the abbey was suspended and the church was made into a Temple of Reason, and then later into a Temple of Law. The church was returned to Catholic control in 1802. On 21 July 1831, Prince Leopold of Saxe-Coburg-Gotha took the oath that made him H.M. Leopold I, the first King of the Belgians, on the front steps of the church.
Image by Karelj on Wikimedia under Creative Commons License.
Sight description based on wikipedia