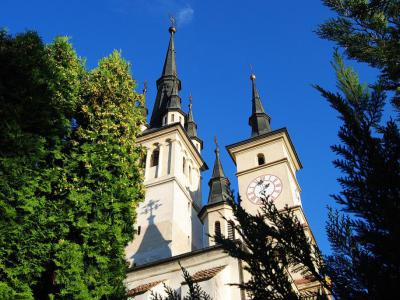 Saint Nicholas Church is a Romanian Orthodox church in Braşov, dominating the historic district of Şchei. The church was established in 1292. It was mentioned in a Papal bull issued in 1399 by Pope Boniface IX. Starting in 1495, the church was rebuilt in stone by the locals, with help from Vlad Călugărul, Voivode (Prince) of Wallachia. More help was provided around 1512 by Neagoe Basarab. Initially built in the Gothic style, it was later redone in the Baroque style. It has frescoes painted by the renowned muralist Mişu Popp. Next to St. Nicholas Church is the First Romanian School (started in 1583), and a statue of Coresi. Nearby is a cemetery, where Ioan Meşotă, Aurel Popovici, Vasile Saftu, and Nicolae Titulescu are buried.

This sight is featured in a self-guided walking tour of Brasov, Romania within the mobile app "GPSmyCity: Walks in 1K+ Cities" which can be downloaded from iTunes App Store or Google Play. Please download the app to your mobile phone or tablet for travel directions for visiting this sight. The app turns your mobile device to a personal tour guide and it works offline, so no data plan is needed when traveling abroad.

This orientation walk covers top 14 attractions of Brasov, including the city's medieval fortifications, museums, and architectural monuments. The imposing grandeur of these magnificent structures stands witness of and provides insight into the city's eventful history, both ancient and recent.

Brasov cultural and historical heritage is immense. It is reflected in the city’s museums and memorial houses. Most of the museums are located in beautiful historic edifices with grand architecture. Visiting Brasov museums you will learn the history of the city, daily life of medieval residents, local arts development and see the first Romanian school with the oldest printed books. Take this...  view more

Brasov is a religious city boasting a number of churches, monasteries, cathedrals, and synagogues which are historic monuments as well. Almost every religious building here represents an architectural heritage. The most notable examples are those built in the Middle Ages that are well-preserved today. Take this walking tour to see Brasov’s most famous religious buildings.

Transylvanian culture is very rich in artistic masterpieces, notable cultural figures and venues. Brasov theatrical and musical productions became successful both on Romanian and international stages. The city boasts a number of memorial houses of national poets, painters, musicians, journalists and other distinguished people. Art is part of everyday life in Brasov; some of the city’s cafes are...  view more