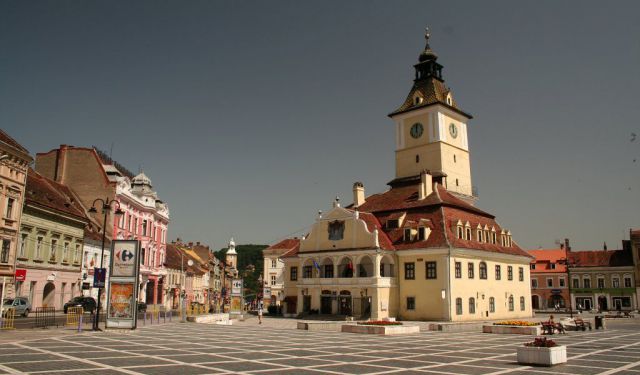 Brasov's architectural monuments impress with their beauty and mixture of styles. The city boasts medieval constructions as well as modern architecture buildings executed in Renaissance, Neo-Baroque, Classic, Empire, Eclectic, Art-Nouveau and Romanesque styles. Most architectural monuments are headquarters of the city administration, museums and other cultural venues. Here is a list of Brasov's architectural masterpieces you should check out during your walking tour.
Image Courtesy of Wikimedia and Camil Ghircoias.
How it works: Download the app "GPSmyCity: Walks in 1K+ Cities" from iTunes App Store or Google Play to your mobile phone or tablet. The app turns your mobile device into a personal tour guide and its built-in GPS navigation functions guide you from one tour stop to next. The app works offline, so no data plan is needed when traveling abroad.

The Brasov Prefecture was built in the early 1900s at the request of the local Chief Justice, Georg von Weer. The imposing Palace of Justice boasts Neo-Baroque style which is quite typical of the Hungarian Budapest historic monuments of that period. The influence of the neighboring Hungary is thus quite obvious.
Image Courtesy of Wikimedia and Alexandru Panoiu.
2

The City Hall is a classic example of Art-Nouveau architecture created in 1898. Initially it was designed as a Treasury Hall. This three story building has some prominent decorations, such as the hexagonal-shaped towers flanking the corners and an elaborate Art-Nouveau facade with a clock at the top. The City Hall bears a strong influence of the Austro-Hungarian Imperial style.
Image Courtesy of Wikimedia and Whitepixels.
3

The building of Casa Armatei is situated at the Military Circle. It is one of the most important buildings in the city from an architectural standpoint. The building was raised between the two World Wars in the first decades of the 20th century. The plans of the building were designed by Constantin Iotzu and merges modern architecture with Romanesque style of the early 20th century. Today, Casa Armatei offers its spacious and luxurious halls for weddings and the Brasov Philharmonic gives concerts there.
Image Courtesy of Wikimedia and Andrei Dan Suciu.
4

The Rectorat is an architectural jewel of the city and one of the most popular attractions. It was constructed between 1881 and 1885 by famous architect Peter Bartsch in neo-Renaissance style and is an extraordinarily beautiful example of modern architecture. The building consists of three floors. The ground floor reflects power with its stone structure and arched windows. The second floor impresses greatly with its aristocratic "sgrafitto" paintings. The Rectorat is also worth seeing at night when illumination is turned on.
Image Courtesy of Wikimedia and Victor Briciu.
5

Casa Baiulescu is located at the place where one of Brasov Fortifications' legendary bastions, Bastionul Curerarilor, was placed. You can reach it at the northeastern part of the fortifications. The bastion was demolished in 1887 and a new building in Modern Romanesque style was constructed by local architect Manole Diamandi. The edifice was built by the first Brasov mayor, Gheorghe Baiulescu, as a gift for his daughter’s wedding.
Image Courtesy of Wikimedia and Mister No.
6

George Bariţiu Library was the first public library in Brasov. Since 1969 its central branch has been located in a beautiful building on Eroilor Boulevard near the way to Poiana Brasov. The building was erected in the first half of the 20th century and represents modern architecture in Art Nouveau style. Arches are the central element of the architecture. George Bariţiu Library owns a great collection of national and universal cultural heritage.
Image Courtesy of Flickr and Andrey.
7

One of the most prominent local buildings is Casa Sfatului (The Council House). The original Council House was built in the 16th century and stood in this place until the 20th century when it was demolished and replaced with the more modern building that we see today. Since 1950 it has housed a local history museum. The square where it stands marks the center of the Old Town; the narrow streets nearby are filled with numerous restaurants and cafes.
Image Courtesy of Wikimedia and Balcondelmundo.
8

The Black Church (Biserica Neagra) in Brasov, is one of the most beautiful Gothic monuments in Romania and the second-largest church in the country. Built from 1383 to 1477, over 600 years old, the Black Church is the city’s symbol. The stone church is the parish church of the Evangelical Lutheran community. Its name is derived from the church's walls, which turned black during a fire in 1689.

The church was built on the site of a Romanesque church, destroyed in 1241. It was originally a Roman-Catholic church dedicated to Saint Mary, the patron saint of Brasov, reflected in a fresco in the southern hall. The Protestant Reformation changed the church from Roman-Catholic to Evangelical-Lutheran in 1542.

Though the church was designed in the Gothic style, reconstruction works over the years were carried out in the Baroque architectural style. These reconstruction efforts were necessary to keep up with the growing size of parishioners and damage to the church caused by fire and earthquakes.

The Black Church has the biggest mechanical organ in the country. The Baroque organ, erected in 1839, has almost 4,000 pipes. It is one of the few Baroque organs in the world that remains in use and unchanged from its original form. The church is also known for its six-ton bronze bell, the third-largest bell in Romania.

The second-largest collection of oriental carpets in Europe is located inside the Black Church. There are 110 carpets on display, dating from the 15th century. There are no written records regarding where or when the carpets were received, but an inventory shows only 39 rugs in the church in the 1830s. It is thought that many of the rugs were bequeathed to the church after the deaths of parishioners.

Visiting the Black Church, the main city landmark, is one of the best things to do in Brasov. Its history is a faithful image of the main events that created the past of Transilvania in times of peace and war.

The edifice of the Andrei Saguna College was constructed in 1851. Its design was planned by Romanian architect Stefan Emilian. The building merges three architectural styles: Renaissance, Classic and Empire. On the front wall of the building you can see an inscription with the college's motto: "Litteris et virtuti". Andrei Saguna College is an important cultural place that welcomed notable Romanian poets, artists and musicians. Plates with their names are placed on the walls of the college.
Image Courtesy of Wikimedia and Daniel Pandelea.
10

The Lyceum was named in honor of Andrei Muresanu in 1992. It is located in a historic part of the city, in the Schei district, in a building erected at the beginning of the 20th century. The project of the edifice was realized by architect G. Ducsoiu. The building features Neo-Romanesque style of modern architecture.
Image Courtesy of Wikimedia and Mister No.