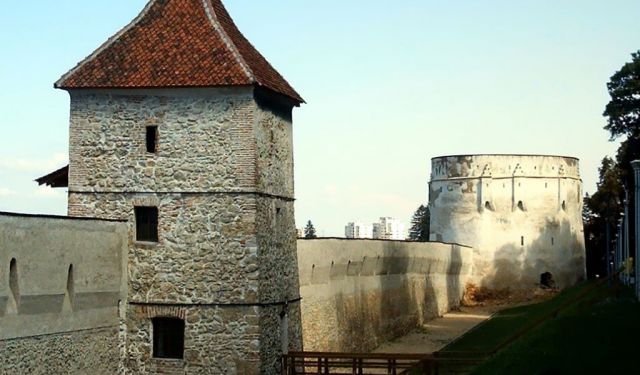 Frequent invasions by Turkish Tatars caused the Brasov residents of the 13th to 15th centuries to construct fortifications surrounding the settlement. Brasov became known as the “stronghold of seven bastions.” Numerous towers were constructed among the bastions but they were ruined and you can see only a few of them today. There are six bastions preserved. Take the Brasov Fortifications Tour and enjoy the mystic atmosphere of the old constructions.
Image Courtesy of Wikimedia and Alex:D.
How it works: Download the app "GPSmyCity: Walks in 1K+ Cities" from iTunes App Store or Google Play to your mobile phone or tablet. The app turns your mobile device into a personal tour guide and its built-in GPS navigation functions guide you from one tour stop to next. The app works offline, so no data plan is needed when traveling abroad.

The Black Tower is not far from Bastionul Fierarilor. It is placed on Warthe Hill. The tower was constructed in the 15th century at the same time as the White Tower. It got its name after a fire in 1689, when its wall became black. The tower has 11 m height and its walls are 2 m thick. Each side of the tower has six shooting holes arranged two by two in three lines. The tower was damaged several times. There is a small museum in the Turnul Negru that tells its history.
Image Courtesy of Wikimedia and Zoldi Emeric.
2

The White Tower was built between 1460 and 1494 and represents one of the most massive constructions of the fortification. The walls are 4 m thick in the basement and the tower is 19 m in diameter. It has battlements, holes for pitch and balconies. The tower is connected to Graft Bastion with a bridge. A fireplace is still preserved in the interior of the tower. The last restoration of the construction took place in 2005-2006 and today there is a museum in the tower's hall.
Image Courtesy of Flickr and Alexandru Panoiu.
3

The Graft Bastion was constructed in 1515-1521 to connect soldiers of the town with the White Tower. It is conveniently located in the northwest of the Old Town fortification. The walls of the bastion are 4 m thick in the basement and the constructions consist of two floors and an attic. Shooting holes and holes for pitch are still well preserved. Because of a large flood that took place at the beginning of the 19th century, the exterior wall of the Graft Bastion was greatly weakened. The construction was renovated from 2004 to 2005 and today it contains one of the sections of the Brasov Historical Museum with a collection of weapons, documents and photographs on its second floor.
Image Courtesy of Flickr and Gary Todd.
4

The bastion is located in the corner of the Brasov fortress and has existed since 1521. The construction has a pentagonal form, shooting holes and holes for pitch. Bastionul Fierarilor was damaged by several hard rains and floods and it got its current look in the beginning of the 18th century, with some reconstruction done later. In 1923, it was converted into the Brasov Archives Headquarters, whose documentation was taken from the Council House to the bastion and is still kept there today.
Image Courtesy of Wikimedia and Alex:D.
5

Catherine's Gate (or Poarta Ecaterinei as they call it in Romanian) is part of the old defensive complex. It was built in 1559 by the local Tailors’ Guild to replace the old gate which was destroyed by flooding in 1526. It is named after the St. Catherine's Monastery that stood here before. This is the only original city gate to have survived since the medieval period.

Interesting fact is that during the Saxon rule - between the 13th and the 17th centuries - the Romanians were forbidden from owning property inside the fortress and could only enter the town at certain times. At entry, they were to pay a toll for the privilege of selling their goods inside the citadel. The four small corner turrets of the gate symbolize the town's judicial autonomy and in particular "the right of the sword" which is the right to execute. Above the gate is the city's coat of arms, featuring a crown on an oak tree trunk and roots.

Scaffold's Gate (Poarta Schei) is a 19th-century gate with passages for one-way automobile traffic and two pedestrian passages on either side.

According to the gate's inscription, it was built after a visit from the Emperor of Austria, Francis Joseph I. He visited Brasov in 1817, and the construction was completed in 1828. The gate was necessary as it allowed high traffic to pass through the walls.

Designed in a Classical style, the Scaffold's Gate is made from stone and brick and includes decorative masonry and Latin inscriptions that show both the dates of construction and the purpose of the gate.

The gate is located south of a roundabout where both Prundului Street and Sirul Ludwig van Beethoven Street meet Porta Schei Street. Tourists can walk directly through the gate, and then pause to view the domed interior ceiling.

Weavers' Bastion (Bastionul Tesatorilor) is a historic fortification that now functions as a medieval museum. Unlike many of the bastions in the region, it withstood the great fire of 1689. It remains preserved in its original shape.

Construction on the bastion began in 1421. It has four levels with oil wells and two watchtowers, containing rooms for weaving workshops, a sentry room, a ballroom, and a wedding hall. The bastion was built, defended, and maintained by the linen weavers' guild.

The bastion was abandoned in 1750 due to a lack of need for this type of defense. Later, it was used for document storage, a meeting place, and grounds for the confirmation of weaving apprentices. In the early 20th century, the excellent acoustics in the bastion led to its use for operas and concerts.

Today, Weavers' Bastion is part of the County Museum of History. The exhibits show documents and artifacts from archaeological excavations. Concerts and festivals are also regularly held at Weavers' Bastion.
Image Courtesy of Wikimedia and Whitepixels.
8

The Spinners' Bastion ( Bastionul Funarilor) is the oldest bastion of the Brasov citadel. It was first mentioned in documents in 1416, though it might have been built much earlier than this.

The bastion is six-sided with firing ports for defense. It was about 39 feet high in its original shape, but damages to the structure over the years have significantly altered its appearance. It survived the great fire of 1461 but was damaged in the great fire of 1689.

After its restoration, the Spinners' Bastion was used as a warehouse by the ropemakers' guild. A home for the guild was constructed near the bastion in 1794, but both were sold 100 years later.

The Spinners' Bastion was renovated in 2006 and is now a popular tourist site. Visitors are welcome to explore the bastion daily from 12 PM to 7 PM.
Image Courtesy of Wikimedia and Whitepixels.
9

The Drapers' Bastion is one of the six bastions of the preserved Brasov Fortresses. It is located in the southwestern corner of the fortification line. It was constructed between 1450 and 1455. The construction has an elliptical form with four levels, 16 meters in diameter. It is one of the best-preserved bastions in the city. A new glass dome is planned to be added to the structure and the bastions’ building will be used as a museum.

Furriers’ Bastion is located next to the Drapers' Bastion and was constructed in 1452. It is a heptagonal construction, with shooting holes and holes for pitch. Brick arches were added later. It is currently a half-demolished construction. Furriers’ Bastion has a connection to the Drapers' Bastion. The last renovation was done in 2005.
Image Courtesy of Flickr and Clay Gilliland.