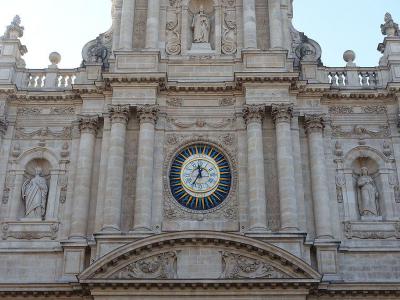 The Saint Paul-Saint Louis Church is one of the oldest Jesuit sites in Paris. Completed in 1641, it boasts an abundance of classical elements, such as Corinthian pillars and heavy ornamentation, and was greatly influenced by Baroque architecture, introduced by the Romans. The salient feature of the church is a 195-foot dome, which is best viewed from the inside because the columns of the three-tiered church’s front elevation hide the dome. The church is designed marvelously with clean classical architectural lines that run through the nave and side aisles. Arches have been embellished with astounding Baroque decorations, while sculptures have been posted and paintings been drawn in the style liked by the Jesuits in the 17th century.

Louis XIII laid the foundation of the church in 1627. In 1641, Cardinal Richelieu served the first mass here in the presence of the royal family. The church was badly damaged during the French Revolution; the invaders stole most of the artifacts and collectibles. The not-stolen items were brutally broken, largely depriving the church of its precious assets. A handful of works, that have survived unharmed, can now be seen near the entrance; also, fortunately enough, the church has retained its abundant internal carvings. The St Paul-St Louis also briefly served as a "Temple of Reason" under the Revolutionary government, which had banned traditional religion. Nearly 250 years after its construction, in 1872, it was finally re-consecrated and has served since as one of the local community churches. The massive red doors and asymmetrical clock face give it a burst of whimsy that makes it worth a quick stop as you explore Le Marais.