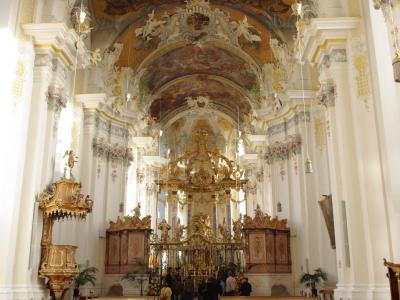 Saint Paulin Church is a Baroque church constructed between 1734 and 1753, the interior was designed by Johann Balthasar Neumann. The ceiling of the nave features a painting by the artist Christoph Thomas Scheffler. The tomb of the saint after which the church is named, Paulinus, is located in the church's crypt.

Based in Germany's oldest city with a significant Roman history, three church buildings have stood on the site since the 4th century.

As well as being the architect of the building, Neumann contributed his Rococo architectural flair to several internal elements, including the stucco work, ornate altars, and ciborium. The sculptor Ferdinand Tietz carried out several of Neumann's plans, carving elements such as the statuary and choir stalls.

The ceiling of the nave features a large fresco painted by Christoph Thomas Scheffler, portraying scenes from the life of St Paulinus and depictions of the martyrdom of the Theban Legion.

The church's four bells were cast by the brothers Charles and Joseph Perrin between 1821 and 1822. As few European bells from the 19th century survived two world wars, the bells are considered historically important.
Image by Berthold Werner on Wikimedia under Creative Commons License.
Sight description based on wikipedia