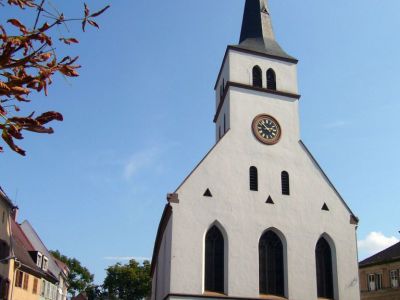 The rather lopsided aspect of Saint William’s Church is only one of its charms and it is one of the most beautiful churches in Strasbourg.

A monastery was built on the marshy banks of the River Ill in 1307 by Hénri de Mullenheim, a knight who survived the Crusades and who wanted to give thanks for his safe return to his homeland. It was the home of the mendicant monks of the Order of the Hermits of Saint William, but only the church remains of the original monastery.

As it wasn’t far from the wharfs, in 1331 it became the parish church of the Corporation of Shipbuilders. In the 15th century a second portal was added as well as a triple-arched gallery. It was more or less abandoned during the late 16th century and was extensively restored in the 17th century.

One of the most important relics in the church is a 14th century tomb effigy – a wooden relief in polychrome depicting the conversion of Saint Catherine and Saint William. The pulpit dates back to 1656 while the altar was installed in the 18th century.

Although the organ was installed in 1987, the organ cases belong to an original instrument built by Andreas Silbermann in 1728.
Image by Jonathan M on Wikimedia under Creative Commons License.
Sight description based on wikipedia