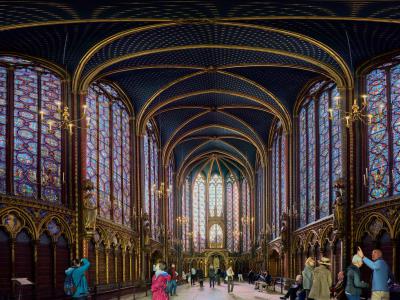 The crown jewel of Gothic architecture in Paris, the Holy Chapel, is located not far from the Notre-Dame Cathedral. Aged almost 800 years, the chapel is renowned for its stained glass and most notably the 15th century rose windows in the upper part, widely regarded to be the best of its kind in the world. These and other things make this church outstanding even among the most extraordinary medieval monuments of Paris.

The chapel was built for an exceptional man, King Louis IX, who led the 7th and 8th Crusades to the Holy Land and brought home, among other treasures, what was believed to be the Crown of Thorns worn by Jesus himself! Naturally, a precious relic such as this required a depository, but besides that, the Holy Chapel was conceived also as the palace chapel for the king and the royal family.

Over the centuries, the chapel had sustained multiple damages. A repeated victim of floods and fires, it suffered particularly badly during the French Revolution when its sculptures were deliberately destroyed and furnishings looted. Eventually, to mend the damage, in the 19th century a great deal of renovation became necessary involving skilled craftsmanship and meticulous attention to detail. The result of that work deserves commendation, and the chapel we see today is as much a 19th century monument as it is a medieval one. Miraculously, about two-thirds of the original stained glass has survived. It looks particularly impressive in sunny weather, but even when it's cloudy, the glass is absolutely fabulous.

Just like many other religious sites of the period, the Holy Chapel was a symbol of Jerusalem meant to evoke paradise on Earth for those saved at the Last Judgment. To this end, the building had a cedar wood spire placed on top, which at that time was considered a technical feat. It proved to be just as great from an artistic standpoint either, magnificently capturing the spiky spirit of the Gothic forms. The Holy Chapel is impressively simple and coherent, compared to other cathedrals and churches of that period, and represents medieval Gothic architecture in its purest form. In contrast to its apparent architectural simplicity, on the inside, the chapel boasts rich decoration in the upper part which is truly remarkable and dazzling in its gilding and color.