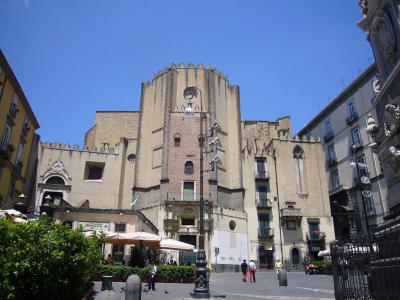 The San Domenico Maggiore Square lies in front of a church of the same name. It is in the historic center of Naples and Spaccanapoli" Street on which it is located was one of the three roads laid by the early Greeks when the city was called Neapolis.

The San Domenico Maggiore Square was laid between the 15th and 19th centuries during the reign of the Aragonese rulers. They made it one of the most important centers of the city. The square is surrounded by many important medieval and structures built by the Spanish rulers.

The San Domenico Maggiore Square has an important monument at its center. It is an obelisk erected by Dominican monks of San Martino after a plague killed a large portion of the population of Naples in 1656. The statue on top is that of San Domenico di Guzman, the founder of the Dominican order. Other notable buildings flanking the square are the Palazzo Petrucci, the oldest surviving building in Naples, the San Domenico Maggiore church and the adjacent abbey, that was the original seat of the university of Naples and the Palazzo Sangro di Sansevero, the residence of the family of the early scientist and innovator, Raimondo di Sangro, Prince of Sansevero.
Image by Lalupa on Wikimedia under Creative Commons License.