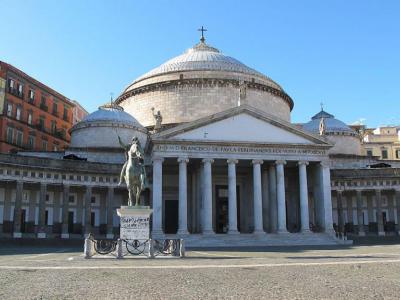 The church of San Francesco di Paola is a neoclassical style building flanking the west side of the Piazza del Plebiscito, the largest square in Naples. It lies directly opposite the royal palace.

The church of San Francesco di Paola was commissioned by Joachim Murat, King of Naples as a monument to Napoleon Bonaparte, his brother in law. It was expanded by Ferdinand I and converted into a church when he recovered the throne of Naples after the defeat of Napoleon. The building was designed by Leopoldo Lapera and was completed by the architect, Pietro Bianchi in 1846. The church was dedicated to St. Francis of Paola who lived in an abbey on the site of the square in the 16th century.

The church of San Francesco di Paola has a 58 meter high dome resembling the pantheon of Rome. It is located above the altar and is supported by 34 thick columns that have a height of eleven meters each. The main portico is supported by a semicircular row of white Doric columns. There is another front portico with six Ionic columns supporting the roof. It is a basilica and an active place of worship today and a popular venue for weddings.
Image by Baku on Wikimedia under Creative Commons License.