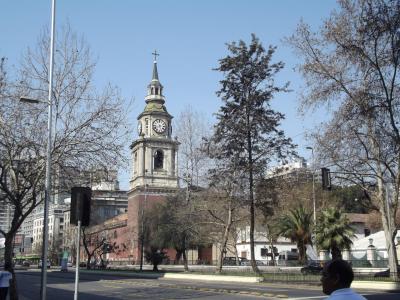 The church and the convent of San Francisco form the oldest religious sight in Santiago and the former symbol of the city. The colonial complex preserves a lot of memories and holds great spiritual importance for Santiaguinos.

The church, whose history is tightly intertwined with that of the city, was originally built in 1554 to accommodate the Virgen del Socorro. However, an earthquake reduced the first building to dust and the present day structure is a replacement built on the same spot later on. Its walls, a testament to the old age, have been modified and reinforced several times over the years.

A lot of ornamental additions have been made to embellish the structure, including a beautifully decorated wooden roof – a magnificent sight to behold. There is also an annexed convent which showcases spectacular colonial art, including silverware, tapestry, figurines and paintings, which, if combined, could easily have won a prize as the largest and finest collection of colonial art in Chile. There are also many religious and other artifacts that were once used by the monks, and a wonderful collection of silverware, carvings and dozens of paintings in the rear rooms, which depict the life at the time of Saint Francis.

Why You Should Visit:
Full of Spanish paintings and other art forms in the unique style of the time. The attached museum also contains a vast array of extremely old ecclesiastical items and artworks which can't be photographed so the only way to see them is to go there. Well worth the small entry fee, but note that there is very little information in English.

Tip:
The peaceful internal garden is a cool oasis on a hot day, with chickens and peacocks roaming about, and stunning tropical flowers.