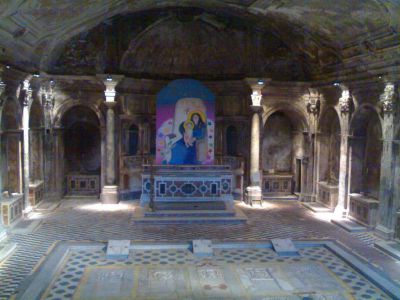 The San Gaudioso Catacombs are a maze of Paleo-Christian burial chambers located beneath the Church of Santa Maria della Sanità in Naples. The graves of bishops and common people are found here.

Tunnels were dug into the Capodimonte hillside by the ancient Romans to serve as water cisterns. They later became burial chambers for ancient Christians from the 5th century. St Gaudiosus, a North African bishop and hermit, was enshrined here in 452 and it became an important place of pilgrimage.

The San Gaudioso Catacombs have many 5th and 6th century frescoes and mosaics. They also present a range of burial techniques. A unique technique, used between 1620 and 1650, was to wall a corpse in a standing position in a niche with the head cemented to the wall. The body was punctured to drain its fluids. After all the fluids drained away, the headless body was buried and a frescoed portrait of the deceased was painted below the skull of illustrious men and women. Several bodies of poorer families were drained away in the same niche without a fresco to preserve their memory. A tour takes visitors past the crypt of the Church of Santa Maria della Sanità in Naples to view the rows of stone niches in the catacombs today.
Image by Baku on Wikimedia under Creative Commons License.