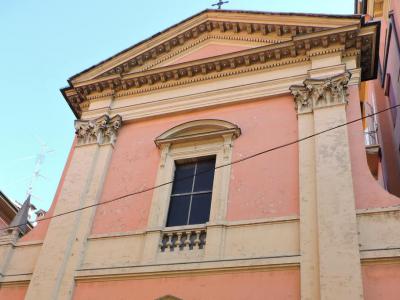 The Celestine order established itself in Bologna in 1368 at the request of Antonio Galluzzi. Under his patronage, they built a monastery and church, dedicated to St John the Baptist. The monastery extended to Via San Mamolo. In 1482, the church had become the home of the parish. In 1535–1554, it underwent reconstruction in its present general layout. In 1560–1561, the convent was rebuilt. In 1580, a bell tower was added. The church underwent a further reconstruction Carlo Francesco Dotti and Francesco Tadolini during the 18th century.

The convent has been used as a meeting hall for the Council of Thirty, and other government and public offices over the centuries. In 2011 it was also home to a state archive
Image by Dimitris Kamaras on Flickr under Creative Commons License.
Sight description based on wikipedia