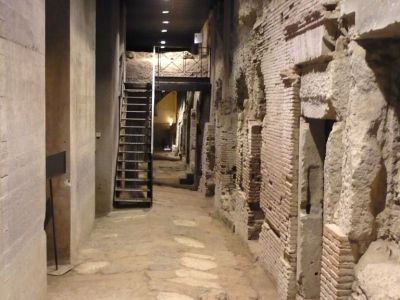 The excavations of San Lorenzo Maggiore have revealed a wealth of details about the city of Naples in classical times. The site of Piazza San Gaetano near the church was once a Greek Agora or marketplace. Later, it became a Forum or Roman marketplace. Excavations have also revealed the great hall and three naves of a sixth century paleo-Christian church. Under the Sala Capitolare of the San Lorenzo Maggiore church are the medieval city halls. The excavated area has been opened to the public since 1992.

The excavations of San Lorenzo Maggiore are the only complete excavations around Naples. They show life in the city through the ages. Only half of the original Roman forum has been excavated and visitors can view it by entering the marked gate near the entrance of the church. One can see a whole ancient street from the 4th century BC complete with workshops, laundries and the public treasury. Most of the objects from the archeological finds are at a nearby museum, housed in a converted four story Palazzo.
Image by http://www.everyfoto.com on Wikimedia under Creative Commons License.