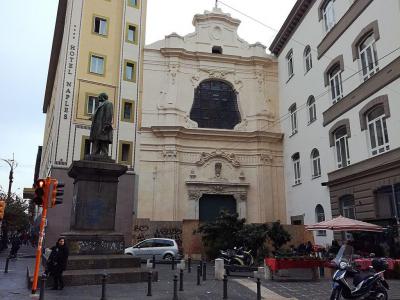 The San Pietro Martire Church is attached to a Dominican abbey and is located near the port in the downtown area of Naples. It was founded by the Angevin Dynasty to serve the poor people who lived in the neighborhood.

The San Pietro Martire Church was constructed in 1294 under the orders of Charles of Anjou. Initially it was a small building that could house about 13 monks. Later it was expanded and a belfry designed by F.A. Picchiati was added in 1650. The structure was completed only in the 1750s. When Napoleon’s brother in law, Joachim Murat ruled Naples, the abbey was closed and reopened again once the reign of the Bourbon dynasty was restored. It was finally closed during the unification of Italy in 1864. The church remains an important place of worship in the city.

The San Pietro Martire Church was badly damaged during World War II. In 1953, the grounds were converted into a tobacco processing factory. The building was completely restored in 1979. It now houses the faculty of Literature and Philosophy of the University of Naples. The church has become a university chapel and the old abbey houses university lecture halls.
Image by Skeggzatori on Flickr under Creative Commons License.