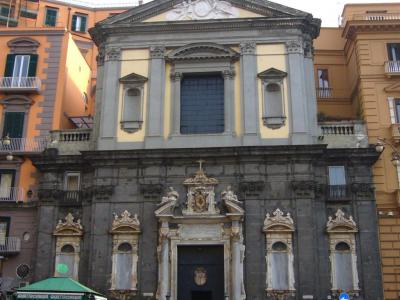 The Santa Chiara Church is part of a complex that includes a monastery, tombs and an archeological museum. It was severely damaged by the World War II allied bombings and restored in 1953.

The Santa Chiara Church was commissioned by Robert the Wise, King of Naples and his second wife, Queen Sancha of Majorca in 1310. It was built between 1313 and 1340. The church and the convent had an austere Gothic style. The interiors were redesigned in Baroque style between 1742 and 1757. The original structure was completely destroyed and only a shell remained after World War II.

The Santa Chiara Church has a simple façade with only one rose window at the center. The west porch is the only surviving part of the 14th century structure. The interior consists of the largest church hall in Naples. The nave is surrounded by ten chapels that contain important gothic monuments. The tomb of King Robert is behind the main altar. Other tombs are those of King Francis II and his consort, Maria Sophie of Bavaria and their daughter, Princess Cristina. The tomb of Salvo D'Acquisto, a national hero is also located here. The cloister houses a museum dedicated to the history of the convent where remains of the church interiors that survived war damage and other collections are on display.
Image by Lalupa on Wikimedia under Creative Commons License.