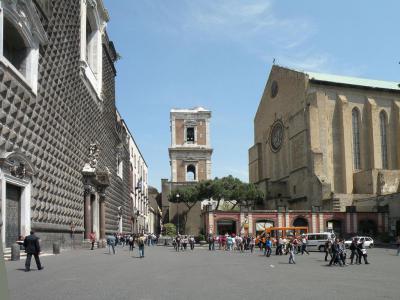 The Santa Chiara Complex is home to several religious buildings, including the Church of Santa Chiara, an archeological museum, tombs, and a monastery.

The complex was built by Queen Sancha of Majorca and King Robert of Naples in 1310. King Robert is buried in the complex.

The Church of Santa Chiara was originally built in Provençal-Gothic style; it was updated to the Baroque style in the 18th century. It was restored again after being damaged during World War II.

The west facade of the church has a central rose window but is otherwise plain. The interior is the largest in Naples, with ten chapels. The chapels have superb Gothic monuments.

The complex was built to hold the royal Anjou tombs. Joan I was buried here in 1382.

The church's cloisters are stunning. Seventy-two columns line the garden walkways. A series of benches connect these columns. The columns and benches are decorated with 18th century hand-painted Majorca tiles. Each tile is unique, and together the tiles show various scenes. Elaborate vines and flowers climb the pillars. Scenes show rural life and fishermen with their Mediterranean catch.

The cloister's porticoes have hand-painted 17th-century frescoes decorating the ceilings.

The gardens are filled with citrus and lavender trees. Visitors will also find a fountain in the middle of a Middle Age friar's refectory.

The museum features the ruins of a first-century Roman spa and sauna. Visitors will also find various ecclesiastical artifacts and historical displays in the museum.

This complex shows the dedication of King Robert the Wise and Queen Sancha to their saints, St. Francis of Assisi and St. Chiara. The beautiful cloisters are the biggest draw but don't miss the impressive church and well-preserved Roman ruins.

The Cloisters get busier throughout the day. Arrive early and walk through the cloisters first.
Image Courtesy of Wikimedia and Vitold Muratov.