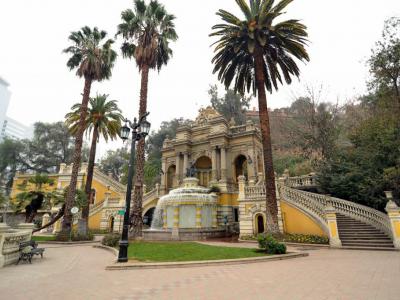 Most of the time, hills are not seen as tourist attractions, but the Santa Lucia Hill in downtown Santiago veers away from this cliché as it features several beautiful sights, including fountains, a castle and stairways. Though it was originally called Huelen, which means “melancholy”, it brings smiles to the faces of many travelers who are awed by its beautiful facade. Its current name commemorates Santa Lucía day which is the date when Pedro de Valdivia conquered the hill in 1541.

The current beauty of the hill can be attributed to the efforts of Benjamin Vicuna Mackenna, who remodeled the hill by developing a road across it, building a chapel and introducing different varieties of trees and vegetation which did wonders to the hill's appearance. This he achieved with the help of Manuel Aldunate, Enrique Henes and Andres Staimbuck. Fountains, as well as several lookout points, have been connected by paths and stairways, and this has made the hill one of the best places for a leisurely walk.

In December 1983, Santa Lucía Hill was declared a Chilean national monument and currently, a lot of events in the Castillo Hidalgo take place there, including weddings. It is also one of the best spots to get a scenic view of the city of Santiago.

Why You Should Visit:
Can be a great addition to any sightseeing walk involving Santiago's central area, as it is right between Barrios Lastarria and Bellas Artes, two of Santiago's most charming artsy areas.
If you're in the market for souvenirs, you're in luck: the hill is located directly across from the Santa Lucia artisan market, where you can find a wide range of reasonably priced Chilean items.

Tip:
It is best to visit on the weekend, as there is less traffic in the city and therefore less pollution.