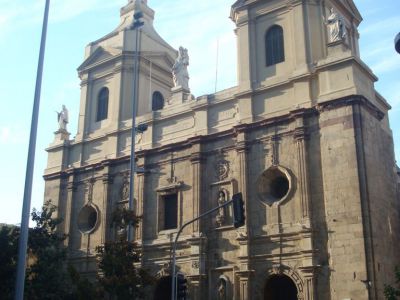 This religious edifice in the downtown area of Santiago is a solid proof that the most beautiful structures can also be the simplest. Its architectural marvel lies in simple lines, dominated by two towers at the top, featuring the Bavarian Baroque style. The church shows a mixture of architectural elements and artistic diversity that may be another reason why it looks so beautiful. The outside appearance reflects neoclassical influence with a touch of Creole. The church was built by Juan de los Santos Vasconcellos, who laid its foundation in 1747, before Joaquín Toesca took over the construction in 1796.

The interior is quite spacious and adorned with several paintings from the colonial era. Visitors can learn much about Santo Domingo in whose honor the church is named. The building has withstood several earthquakes and fires which partially damaged the structure; the interior had to be refurbished, though. In 1951, the church was declared a national monument of Chile.

Why You Should Visit:
Bears the signs of surviving many events and has a largely unadorned interior, the main point of beauty and attraction being the statue of the Madonna and Child dressed in white with a rich royal blue and golden cape.
Image by Carlos yo on Wikimedia under Creative Commons License.
Sight description based on wikipedia

Vaticura is the most fashionable and the richest commune in Santiago. Citizens with a very high income are known to live in this area. The best shops, wineries, and many commercial art galleries are located here. This tour will take you to the most popular places of Vitacura Commune: