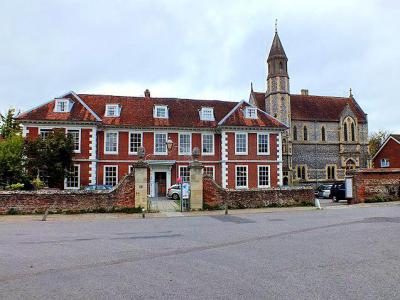 Sarum College is a centre of theological learning, focused on the study of Christianity. Its main, red-brick building, located at the north end of Bishop's Walk, facing directly down to the Bishop's Palace, has long been attributed to Sir Christopher Wren. The house was built in 1677 for Francis Hill, a distinguished London lawyer and deputy recorder for Salisbury, and remained in the Hills' possession until the end of the 18th century.

In 1860, the property was acquired by a Bishop of Salisbury, who set up on premises a theological college. Residential areas were added later; the flint extension was made in 1881 with a chapel and library. The building has been altered several times over the years, including the addition of new residential quarters and meeting rooms.

In February 1952 the main building received a heritage listing. It had been occupied by Salisbury and Wells Theological College until 1995, following which the Sarum College took over.

The college building, in addition to providing space for theological classes, serves as a conference center. It also hosts art exhibitions which are open to the public every day from 9 am to 5 pm (10 am – 4 pm on Sundays), has regular lunchtime musical concerts, as well as a theological bookshop and library with a collection of 35,000 titles.

In addition to that, the college operates as a B&B and also hosts week-long residential stays, allowing visitors the opportunity to live in the Close for a week and explore the history of Salisbury and its Cathedral in more detail.
Image Courtesy of Wikimedia and Jonathan Kington.
Sight description based on Wikipedia.