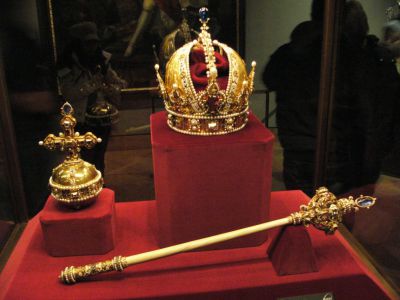 The Schatzkammer holds what is considered to be the greatest treasury collection in the world. Located within the Hofburg complex, the current structure has been in place since 1983. The entrance is located at the Swiss Courtyard. Most days, you can get in for a good visit of about an hour and a half.

Whilst in here, alongside other locations of the complex, you can tour the treasures of the Habsburg Empire which date back over 1,000 years. The items on display have a long history of movement over time: Napoleon's conquests, the decline of the Roman Empire, the Nazis, and the wars fought against Prussia. As such, over the years, the exhibits have been moved back and forth between Vienna and Nuremberg.

Among the beautiful items here is a sword that is believed to have belonged to Charlemagne (Charles the Great, aka Charles I, King of the Franks), the crown of the old Holy Roman Empire, and even the legendary Agate Bowl which, for centuries, was tied to the story of Arthur’s court and the legend of the Holy Grail.

Why You Should Visit:
An incredible blend of Austrian history with just enough "wow" factor to keep you interested – fantastic embroidery, religious relics, and pieces of royal jewelry, all in one place.

Tip:
Get the audio guides – otherwise, you won't get much from the printed text underneath the objects or on the walls.